All our professionals maintain the highest levels of accreditation and pursue ongoing education to stay abreast of the latest trends in the medical field. Read on to learn more about our staff's experience and training. 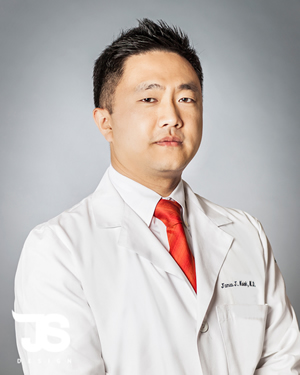 James Jihoon Kwak, M.D., FAAFP is a graduate of Cherry Hill High School West.  During his freshman year at Massachusetts Institute of Technology, he became acquainted with the lives of two medical missionary doctors (David Livingstone and James Hudson Taylor) and decided to become a family physician.  After finishing his bachelor’s degree in Mechanical Engineering from MIT in less than 4 years, Dr. Kwak worked briefly at Boeing Helicopters as an engineer before pursuing his medical degree at UMDNJ-Robert Wood Johnson Medical School.  He was the recipient of the departmental award in Family Medicine at his graduation.  Dr. Kwak completed his Family Medicine training at Crozer-Keystone Family Medicine Residency and became board-certified in 2004.  He then spent seven years at a large group practice in Haddon Heights, New Jersey and enjoyed the popularity and love from his patients and staff until he decided to start Kwak Family Medicine, PC.

Born in Seoul, Korea and immigrating to Northeast Philadelphia at the age of 10, Dr. Kwak is sympathetic to various ethnic communities.  He is fluent in Korean and conversant in medical Spanish.  He has taken care of many ethnic populations including Eastern/Western Europeans, African-Americans, Jews, Arabs, Africans, Latinos and Northern/Southern Asians.  Dr. Kwak loves all American people and believes that the American people deserve excellent primary care.  From his Christian heritage and engineering background, Dr. Kwak has gained a reputation as being meticulous, sincere and compassionate to his patients.

Dr. Kwak and his wife have two sons and two daughters. They are busy running from soccer, lacrosse, swimming, music and martial arts classes for their children. The Kwaks all practice Kumdo, a Korean sword martial arts. He competes in local tournaments. Dr. Kwak and Mrs. Kwak are active members of the Fellowship Alliance Chapel in Medford and Korean United Methodist Church in Cherry Hill. Following his original passion, Dr. Kwak has gone on medical trips to Asia, Africa and Latin America which he plans to do annually.

Having spent teenage years in Cherry Hill, Dr. Kwak considers Cherry Hill as his hometown and has chosen the Cherry Hill area as the location of his new medical practice.  He has envisioned a practice that embraces modern technology and follows current medical standards but still holds onto the traditional solo-private-practice feel where the patients are personally known, and not treated as numbers.

Find us on the map